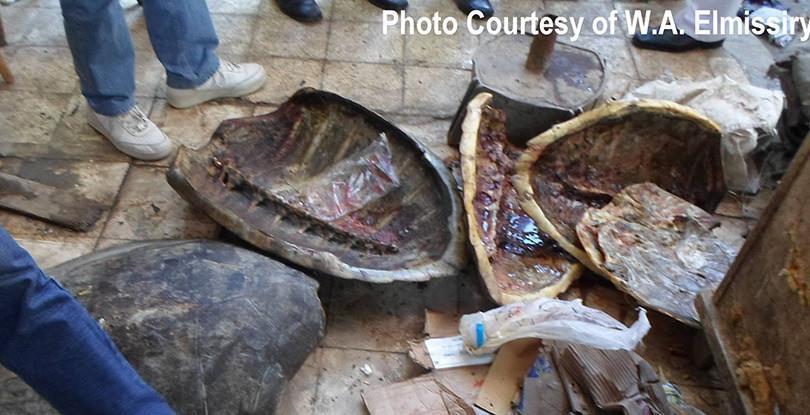 Announcement: Alexandria, Egypt – Government steps in to save sea turtles from slaughter in fish markets

2 June 2015: Egyptian authorities recently confiscated sea turtles that were illegally traded by fishmongers in Alexandria’s fish markets. Sea turtles are endangered species and their trade or consumption is prohibited by law in Egypt and throughout the Mediterranean.

The Egyptian Ministry of Environment organised a successful law enforcement operation in coordination with environmental police authorities in Alexandria on 24th May 2015. The operation was implemented after MEDASSET alerted the Ministry about the resurgence of illegal sea turtle trade in Alexandria fish markets and provided vital information that facilitated the operation. A local citizen group, that is taking action against illegal captivity of wildlife, assisted the police operation.

Two fishmongers were inspected by the police and, as a result, nine sea turtles were confiscated alive and released back into the sea. Several shells of sea turtles, that had already been slaughtered, were also found. Green and loggerhead turtles, as well as a rare leatherback turtle, were among the slaughtered animals.

MEDASSET’s recent assessment of the current status of the illegal sea turtle trade, which was conducted with help from local volunteers, supplied information that helped the authorities to take action. The survey documented the trade and revealed that there is black and public trade of loggerhead (Caretta caretta) and green turtles (Chelonia mydas) in 6 fish markets in 3 areas of Alexandria. Sea turtles are sourced from fishermen and are illegally sold mainly by fishmongers, who keep the sea turtles alive, upside-down on their shells, until they are slaughtered for consumption. Shells of slaughtered turtles are also illegally sold as artefacts.

MEDASSET welcomes the proactive approach of the Egyptian Ministry of Environment and appreciates the efforts of the competent authorities that participated in the law enforcement operation. MEDASSET will continue to work with the Egyptian authorities to put an end to illegal trade and consumption of sea turtles and ensure the implementation of relevant international Conventions, to which Egypt is a signatory party.

Notes to Editors:
Illegal trade and consumption of sea turtles in Alexandria has been documented in past surveys by MEDASSET in 1993 and 1998-1999. These surveys mobilised law enforcement and local conservation initiatives that reduced the trade. The last survey in 2007 showed that only some black trade continued in the fish markets and onboard killing of turtles by fishermen was the main threat at the time. The 2014-215 survey aimed to re-assess the status of the illegal trade.