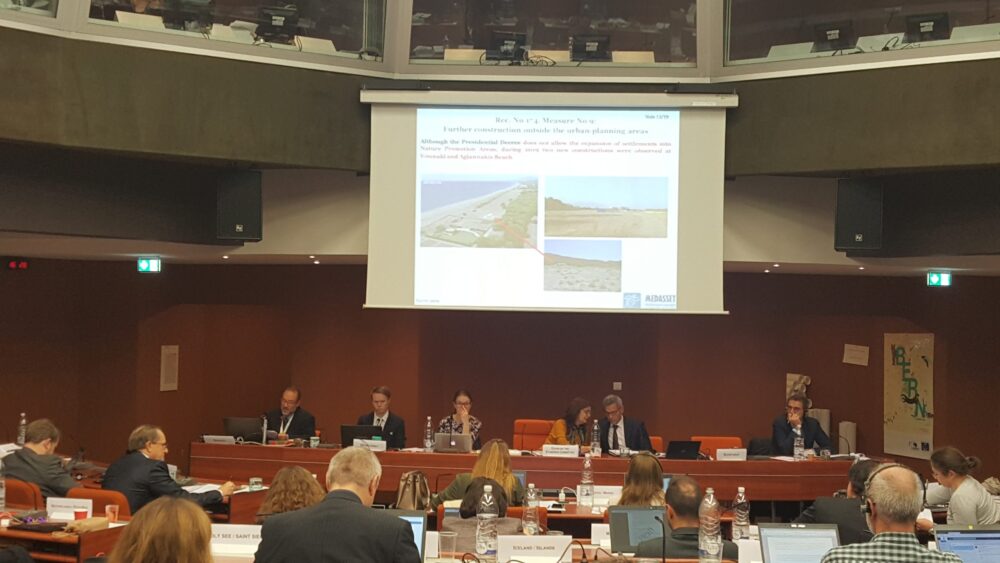 Kyparissia Bay hosts one of the largest reproductive population across the Mediterranean for loggerhead turtles (Caretta caretta). Despite national and international protective legislation and the site forming part of the  EU NATURA 2000 network, the Greek government has failed to introduce and enforce the necessary conservation and management measures, five years after the Bern Convention  Recommendation (Dec. 2014) and three years after the condemning Judgement  of the European Court of Justice (Nov. 2016). While positive steps have been made with the adoption of the Presidential Decree (PD) in 2018, its enforcement is non-existent and we strongly reiterate the urgent need for the enforcement of a Management Plan, as the PD does not address several major issues.

In July 2019, MEDASSET’s experts, in collaboration with ARCHELON’s experts, carried out an assessment of the conservation status of the core nesting area of Kyparissia Bay, which was presented at the 2019 Bern Convention Standing Committee. Threats recorded included illegal building constructions, continued planting and farming of alien species on the nesting beach and dunes, nearshore fishing, unobstructed vehicle access on the nesting beach, lack of beach furniture management and light pollution. We also expressed our intense concern on the agreement of exploration and extraction of hydrocarbons in the marine area adjacent to the protected area.

Decision: The Standing Committee took note of the oral update on progress in the implementation of Recommendation No. 174 (2014) presented by the Greek authorities and the written report by the complainant, MEDASSET.

The Committee emphasized the urgency that the Greek authorities cooperate with the relevant civil society organisations and provide concrete evidence of a thorough implementation of the Presidential Decree and its provisions for the development  of an Action Plan funded by the EU LIFE programme and of all operational paragraphs of Recommendation No. 174 (2014).

The national authorities are requested to keep the Bureau and Standing Committee informed on the progress in the implementation of Recommendation No. 174 (2014).

The file is kept open. 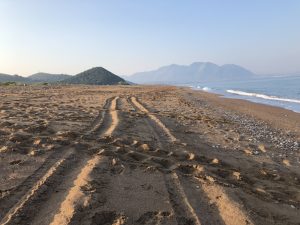 Laganas Bay hosts one of the most important breeding areas for the Caretta caretta within Greece and the Mediterranean. The case of Zakynthos, Laganas Bay was first brought to the Bern Convention by MEDASSET in 1984, and as a result, the Standing Committee in 1987 issued Recommendation 9, to ensure its protection.  32 years since the issuance of Recommendation 9, MEDASSET carried out a three day assessment (11th – 15th August) to evaluate the current situation and found that the breeding adults and their nests are under immense stress.

Despite the importance of Laganas Bay, the Standing Committee’s Recommendations and its designation as a National Marine Park (established in 1999), the Greek government has failed to provide adequate protection. Enforcement of the Presidential Decree’s regulations for the protection of Caretta caretta is severely deficient, with insufficient funding and lack of employed wardens, allowing illegal operations to continue, in particular the illegal businesses at Daphni. Throughout the Bay there is extreme pressure from tourism activities on the nesting beaches and especially from activities within the maritime area.

The Standing Committee, concerned with the continuous issues facing the area, decided to consider this closed file as a possible file, thus bringing it to the agenda of the next Bureau meeting. 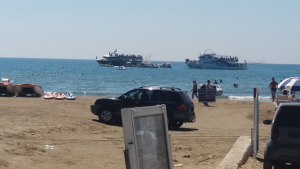 Our campaigns to improve the protection of the important loggerhead[1] nesting beaches in Patara (launched in 1988) and to halt severe degradation in Fethiye (launched in 2009), both listed as protected areas under the Barcelona Convention, continued in 2019. Our previous efforts resulted with the Bern Convention asking the Turkish government to implement conservation measures in 2015, and in 2019 we visited the sites again to assess the current conservation status and submit our findings to the Bern Convention.

In Patara, there was no considerable improvement in the conservation status of the nesting beaches and the conservation issues remain. For yet another year, we documented, lack of management staff, insufficient nest monitoring, absence of zoning and information signs, open beach access for vehicles, horse-riding, camping, litter and derelict facilities on beaches. There were no signs of new efforts for the  implementation of conservation measures, with the exception of sunbeds stacked at night and installation of one new sign. The SPA remains unmanaged and inadequately protected.

In Fethiye, the 2019 assessment recorded no improvements for the conservation status of the nesting beaches and further deterioration was reported: lack of beach furniture management, no zoning and lack of information, no vehicle access control, new infrastructures on the beach, severe light pollution, camping and human presence at night, etc. Habitat destruction continues as businesses expand on the sandy sections of the nesting beaches, further reducing available nesting area habitat and increasing disturbances. Furthermore, the construction of new hotels, behind one of the last remaining pristine nesting areas, will proceed in complete disregard of the Bern Convention’s Recommendations. No signs of new conservation or management activities were observed or recorded. The only exception was litter collection and irregular beach furniture management   The SPA remains unmanaged and inadequately protected.

Decision: The Standing Committee took note of the updated information provided by the Turkish authorities and acknowledged the efforts made for monitoring the turtle nests and improving scientific knowledge. However, the Committee expressed again its concern regarding the numerous measures set in Recommendations No. 182 (2015) and No. 183 (2015) which remain unaddressed as pointed out by the complainant.

The Standing Committee requested again that the Turkish authorities develop and provide a detailed and timebound action plan for complying with the provisions of the above Recommendations, elaborated in close liaison with relevant actors, including civil society organisations.

The file is kept open.

[1] Sporadic green turtle (C.mydas) nesting has been recorded at both sites

Turkey: Recommendation No. 95 (2002) on the conservation of marine turtles in Kazanli beach  and the case of Anamur beach.

Green turtles, “Chelonia mydas” are listed as a globally endangered species, with recent research estimates of only 784 female nesting turtles within the Mediterranean[1], located across the eastern region. Kazanli beach in Turkey, hosts one of the most important nesting sites for green turtles in the Mediterranean. Part of the site has been given Turkish national protection through its designation as a “1st Degree Natural Protection Area”. Despite this, the habitat has been subject to gradual degradation since the 1980’s.

Conservation problems were first reported to the Bern Convention in 1999 and have since then  been regularly discussed at the annual Standing Committee Meetings. A case file was opened in 2000 followed by Recommendation No. 95 (2002) on the conservation of marine turtles in Kazanlı beach, but still responsible authorities failed to take action for several years. As a result, the nesting beach is subject to serious deterioration. MEDASSET visited Kazanlı in August 2019 to assess and document the current conservation situation on the nesting beaches. In summary, though 19 years have passed since the adoption of Recommendation No. 95 (2002), there has been limited progress and significant problems  remainAt the 2019 Bern Convention Standing Committee meeting, MEDASSET presented the continued degradation of the site and its inadequate management. Main threats identified included coastal erosion, wastewater and toxic waste pollution, coastal litter, sand extraction, light pollution,   on the rim of the nesting beach, coastal fishing during the nesting season, nesting females and lack of public awareness.

The case of Anamur

Anamur nesting occurs along a stretch of 12km of beach and is the 2nd most important nesting beach in Turkey and the 4th in the Mediterranean. The 1998 Recommendations adopted by the Standing Committee stressed the need for Environmental Impact Assessments and for urgent and stringent measures to enforce legislation against illegal sand extraction and coastal development.

The local administration showed complete disregard for the National and International commitments of Turkey and ignored the Recommendations made by the Standing Committee in 1998. On 31st May 2019, the Municipality of Anamur started the construction of a ‘public beach & picnic area’ at “Karaağaç”,  without carrying out an Environmental Impact Assessment before work commenced and before the permission was granted to the Mayor/ Municipality from the competent authorities.  Sand was extracted from the beach and neighboring dune system. Lorries placed soil over the beach and dune area, approximately 25-35m from the shoreline. Trees and grass were planted in the soil covered area. The Ministries responsible for protecting the nesting area, fined the Municipality and ordered the Municipality to restore the beach and to remove the trees and soil by 16.July 2019. This was not enforced and the Ministries took no further action.

Decision: The Standing Committee took note of the updated information provided by the Turkish authorities as well as the presentation of the complainant, MEDASSET, which called upon the Standing Committee to urge the authorities to implement all provisions of the recommendation without further delay. It also expressed its concern about the continuing pressures on the area and in particular the erosion of the beach.

It further noted the information provided about the new complaint related to Anamur Beach, expressed its concern, but reminded that this complaint was not on the agenda and would be considered at the next Bureau meeting.

The Standing Committee urged the Turkish authorities to implement all conditions of Recommendation No. 95 (2002) and requested an updated report in two years.

Kazanli: Litter on the beach!

Conservation problems at nesting sites in Akamas and neighboring Limni were brought to the attention of BERN Convention by MEDASSET in 1996 on behalf of the NGO “Terra Cypria” and a case file has remained open since 1997. Akamas Peninsula is one of the longest-standing cases of BERN Convention (Council of Europe). Terra Cypria proved that the implementation of the Convention’s 2016 Recommendation is still outstanding, no legally binding management plans and no effective protection measures are yet in place.  Illegal restaurants continue to operate along the nesting beaches in Akamas and the construction of a massive golf resort behind the very important nesting beach in Limni has been approved.

Terra Cypria supported by MEDASSET called for the reinstatement of the originally envisaged 450m buffer zone between the new resort and Limni nesting beach and urged authorities to take action to ensure enforcement of the management measures on all nesting beaches.

Decision: The Committee thanked the authorities of Cyprus and the complainant organization for their reports and noted the progress achieved by the Government. It welcomed current processes and in particular, the LIFE project aimed at improving the conservation status of sea turtles in the EU, implemented in six countries including Cyprus.

The Committee however noted the evidence provided by the complainant organization, pointing out the insufficient current protection status of the area and the fact that it does not ensure full compliance with the operational paragraphs of Recommendation No.191 (2016). The Committee urged the Cyprus authorities to keep up their efforts and to continue cooperating with relevant civil society organizations involved in the area.

The file is kept open and authorities are requested to keep the Bureau informed on the progress made in the implementation of Recommendation No.191 (2016).