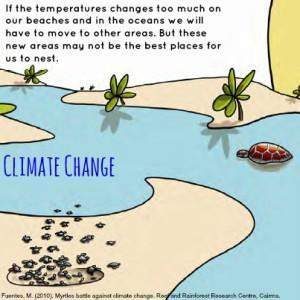 The atmospheric concentrations of carbon dioxide (CO2), methane, and nitrous oxide have increased to levels unprecedented in at least the last 800,000 years. Carbon dioxide concentrations have increased by 40% since pre-industrial times, primarily from fossil fuel emissions and secondarily from emissions from land use change[1].
Warming of the climate system is unequivocal, and since the 1950s, many of the observed climate changes are unprecedented over decades to millennia. The atmosphere and ocean have warmed, the amounts of snow and ice have diminished, sea level has risen, and the concentrations of greenhouse gases have increased. The ocean has absorbed about 30% of the emitted anthropogenic carbon dioxide, causing ocean acidification[2].

Global temperatures have already increased by 0.8〫C and are predicted to increase by over 2〫C by 2100.
Skewing gender ratios – feminization of the population. Sea turtles exhibit temperature-dependent sex determination, this means that the gender of sea turtles is determined by the temperature of the sand in which they are laid. Cooler temperatures produce males and warmer temperatures produce females. With rising temperatures the sand will only increase in temperature, which could eventually lead to an all-female population. If temperatures exceed the upper limit for egg incubation (34〫C), the eggs may not hatch. Already in the Mediterranean loggerhead sea turtle populations are estimated to be female biased on most beaches[3].
Sea turtles may be more resilient to the threat of female-biased hatchling sex ratios than first suspected. Research tracking male sea turtles in Zakynthos, Greece has shown that males breed as twice as frequently as females[4]. Combined with the ability of males to fertilise the eggs of many females and for females to store up sperm to fertilize many nests, the effects of climate change on the viability of sea turtle populations may be less acute.

Ocean heat content has been increasing steadily since 1955[5].
Increasing sea turtle distribution. Sea turtles preferred habitat is warmer water temperatures in tropical or sub-tropical seas (e.g. loggerhead sea turtles prefer over 15〫C)[6]. Thermal niche modelling has shown that turtle habitat suitability will increase as sea temperatures increase. In the Mediterranean, increasingly the Western basin will increasingly become favourable during winter months where once it was too cold[7]. By 2089, the models project that only a small area of the Mediterranean south of France will remain inaccessible to year round occupation by sea turtles. 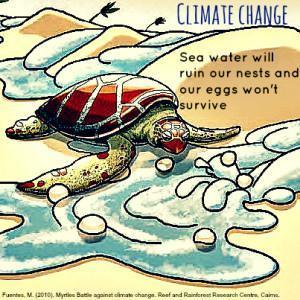 Global mean sea level has risen by 0.19m between 1901 and 2010. Depending on how fast global greenhouse gas emissions can be decreased, sea level is projected to rise by between 0.26m and 0.97m by 2100.
Loss of nesting beaches. As sea levels rise increases alongside increasingly more frequent and severe storm surges, nesting beaches will be increasingly face devastating impacts from erosion and inundation. Already low lying sand beaches such as Bonaire, the Maldives and the Great Barrier Reef have been seriously eroded compromising sea turtle nesting. The low-lying narrow nesting beaches in the Marine Protected Area of the National Marine Park of Zakynthos are especially at risk, especially those where coastal development prevents the inward migration of the beach[8]. However there is the possibility that increasing temperatures may open up areas previously inaccessible to nesting – thermally or geographically[9][10].

The ocean has absorbed about 30% of the emitted anthropogenic carbon dioxide, causing ocean acidification[11].
Threatening food sources. Dissolved carbon dioxide forms a weak acid. As the concentration of carbon dioxide increases the pH of the ocean decreases causing the ocean to become more acidic. Acidification will decrease the availability of key nutrients, including nitrogen, phosphates, silica and iron and in turn reduce the growth of plankton. Luckily loggerhead sea turtles have a broad diet and are less likely to impact on their distribution; however green sea turtles which forage on sea grasses and algae are more at risk[12].

Resilience is the capacity to withstand threat or catastrophe. Research suggests that sea turtles will have some resilience to the impacts of climate change [13][14]. The Mediterranean Sea has been found to be one of the most resilient sea turtle management areas[15].
Natural resilience of sea turtles may include shifting their nesting season to cooler months of the year, selecting cooler beaches to nest or selecting cooler sites to lay[16]. Artificial active management could also be used such as shading nests and relocating to cooler sites. However it is not known the risks of active management techniques and how successful they will be[17]. Until it is known, efforts should be focused on building sea turtle resilience by reducing non-climate related risks to sea turtles.

Last week saw the President of the United States of America Donald Trump withdraw from the Paris Agreement on...

The 2015 Paris Climate Conference, also known as COP21 is here. Negotiators, ministers and heads of state will gather...

A great educational tool for teachers who would like to address the impacts of climate change on the sea turtle population.

We use cookies to ensure that we give you the best experience on our website. If you continue to use this site we will assume that you are happy with it.Ok