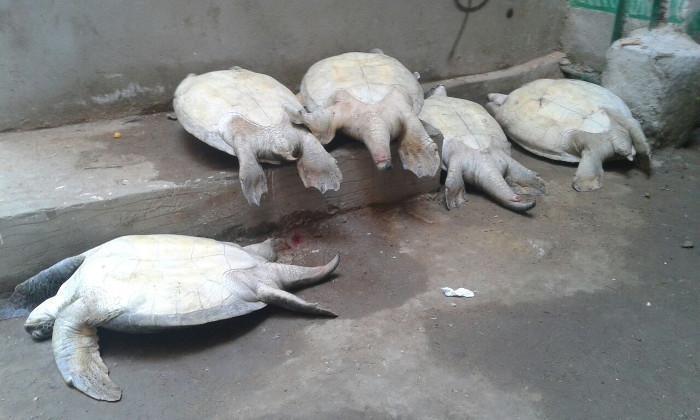 ANNOUNCEMENT – 5 July 2016: A new report by MEDASSET reveals that sea turtles are being illegally traded openly once again in the fish markets of Alexandria, Egypt, and that covert trading persists.

Sea turtle captivity, trade and slaughter was recorded in 6 fish markets in 3 areas of Alexandria. Fishermen in Alexandria reported that they bring ashore 90% of by-caught sea turtles, instead of releasing them, and estimated an annual catch rate of 4.51 turtles/vessel.

MEDASSET – The Mediterranean Association to Save the Sea Turtles – carried out a survey in September 2014 – March 2015, through interviews and visits to fish markets and artefact shops in Alexandria. The new report reveals the route traded turtles are taking as they pass from boat to buyer. Sea turtle meat is sold to customers either by fishermen or by fishmongers. Three fishmongers are specialised in turtle trade and at least 36 trade sporadically. Fishmongers keep turtles alive from 1 to 30 days until slaughter. Placed on their backs, they suffer from exhaustion, dehydration, injuries or disease. Fishermen and fishmongers also supply a sea turtle artefact market. Interviewees reported the sale of sea turtle artefacts to tourists, which may imply infringements of CITES (Convention on International Trade in Endangered Species) rules. 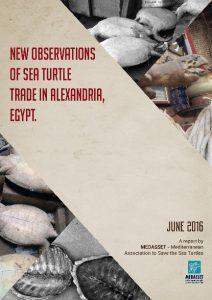 Interviews indicate that the illegal trade in sea turtles has increased by 60-120% in comparison to surveys in 1998-9 and 2007. Eighty-six percent of interviewees had consumed sea turtle meat, mainly due to tradition or alleged health benefits, even though most were aware that sea turtles are endangered and that Egyptian law prohibits sea turtle trade and consumption.

Both loggerhead (Caretta caretta) and green (Chelonia mydas) turtles are targeted, though green turtles are preferred by consumers. Larger animals are particularly targeted by the trade. As these are adult individuals of breeding age, the trade’s negative impact on population numbers is increased. The rare leatherback turtle (Dermochelys coriacea) is also traded, as was revealed during the police operation carried out by Egyptian authorities in May 2015. The sale of embalmed sea turtles and shells was observed in shops, including of hawksbill sea turtles (Eretmochelys imbricata), a species present in the Red Sea. Other endangered species observed being traded were the shortfin mako shark (Isurus oxyrinchus), the fishing of which is illegal according to Mediterranean fishing rules, as well as clams (Tridacna spp) and sharks (Triaenodon obesus) from the Red Sea.

The survey demonstrates that in the Alexandria fish markets, the last major hotspots of illegal sea turtle exploitation in the Mediterranean, illegal endangered species trade has yet to be eradicated. In addition, the death rate of sea turtles caught by Alexandria’s fishing fleet is likely to be much higher than that of other fisheries in the Mediterranean that are not supplying an illegal sea turtle meat and artefact market.

“Egypt’s importance as a priority area for marine turtle conservation is reconfirmed by the survey” noted Mohamed Nada, MEDASSET’s representative in Egypt and co-author of the report. “Ending the trade and mitigating fisheries interaction in Egypt will benefit sea turtle population recovery and amplify conservation efforts across the Mediterranean”, Nada added.

“Through this report, MEDASSET aims to assist Egyptian managers, decision-makers and conservationists, to safeguard sea turtle populations in Egyptian waters and halt the illegal sea turtle trade in Alexandria” stated Lily Venizelos, President of MEDASSET. “We truly hope that this document will be taken into consideration by Egyptian authorities and experts, and that it will act to invigorate enforcement of the trade ban as well as to further sea turtle research and conservation, awareness-raising and educational activities” Venizelos added.

The report provides useful recommendations on research, conservation and policy action, and was formally submitted to the Ministry of Environment of Egypt.

About sea turtles in Mediterranean Egypt: A few green (Chelonia mydas) and loggerhead (Caretta caretta) turtles nest on Egypt’s north Sinai coast (average 7 C. mydas nests/year, 66.5 C. caretta nests/year). However, Egypt is very important for sea turtles that nest in several other Mediterranean countries, as they migrate through and remain in Egypt’s coastal waters to feed or spend the winter months. This means that it is important that sea turtles in Egyptian waters are safe from fishing, pollution and other human threats. However, an additional threat for sea turtles in Egypt, is sea turtle trade, which has been known to occur since the early 20th century. Sea turtle meat and blood consumption, which is uncommon in the Mediterranean, has been recorded in Alexandria since at least the 1970s.

About MEDASSET sea turtle activities in Egypt: MEDASSET’s surveys in 1993 and 1998-1999 documented the sea turtle trade in Alexandria, contributed to the adoption of Law 4/1994, mobilised law enforcement and empowered local conservation initiatives that reduced the trade. The last survey that was conducted in 2007 by WWF Italy in collaboration with Dr Mohamed Nada, showed that past efforts had reduced the trade, though some covert trade persisted, and that the major threat was direct killing by fishermen while on board for meat consumption. The 2014-2015 survey aimed to re-assess the status of the illegal trade.