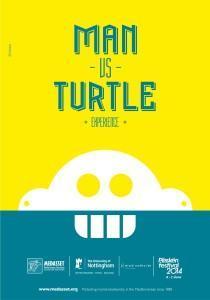 Seventy-two people played the new tug of war game we are calling “Human vs. Turtle“ at the Plissken music festival held in Athens in June 2014. The digital experience was designed by the Mixed Reality Lab of the University of Nottingham with some help from MEDASSET.

In “Human Vs. Turtle” one of the two players represents the “turtle” trying to relax in order to lay her eggs while the other player is the “human” who is disturbing her while she does so… just as happens in real life. The players’ performance is measured via sensors that monitor their electro-dermal activity. These are attached to their fingertips!
At Plissken, the “turtles” won over humans 60% of the time but we think that may be because some ”humans” threw the game on purpose. During follow-up interviews players confessed they really wanted the “turtles” to win. The point of the game however was not who won or lost. Our aim was to create an innovative activity that would be fun, inform the public about threats to sea turtles, and appeal to them emotionally. 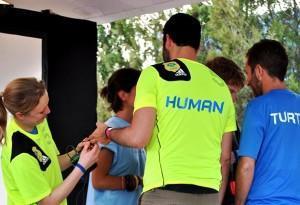 Since the game’s pilot launch at the Plissken festival, the two researchers responsible for `Human vs. Turtle`, Nantia Pantidi and Paul Tennent, have been working on improving the platform so that we can use it whenever and wherever – without any specialist knowledge.

We are very thankful to them as well as to “Loud and Clear Entertainment” for trusting us with their very large projection screen, which was needed for the game at the Plissken Festival, Ioannis Fetanis for designing our poster and graphics, and Kostas Papafitsoros for allowing us to use his turtle video footage.

Interview with LEGOcean Team in Denmark