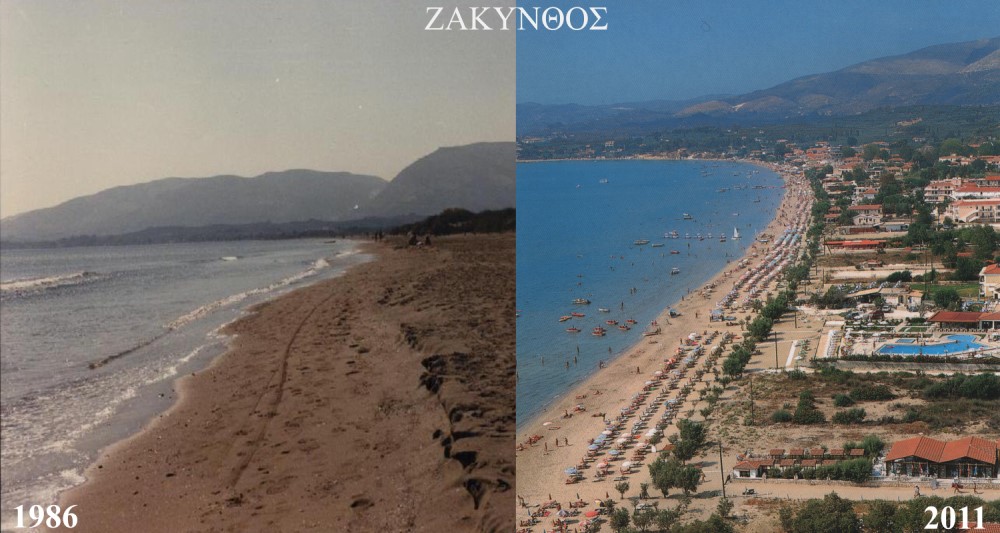 FOOTPRINTS IN THE SAND

I grew up loving the sea with a passion, probably unavoidably, given that from my infancy in Hydra I lived just a step away from the water, at “Molos”, the historic shipyard of the Greek Revolution, which was my family home.

Much later I developed another passion and another home, in addition to Hydra… both of which can trace their beginnings to a storm at sea.

It all began in September of 1975, when late one night we were caught in a fierce squall off the island of Cephalonia and were forced to seek shelter in the bay of Laganas, in Zakynthos, where we dropped anchor.

Forty-six years have passed since that night and yet the sight that met my eyes the following morning remains vivid in my memory:  Before me lay an endless, white, deserted pristine beach, framing the azure waters of the bay like a border of lace.  There was nothing to capture the gaze but sea and sand!  I dived from our boat into the crystalline water and swam to the beach.  There to welcome me was a great row of dunes, their flanks alive with sea lilies, kermes oak, low-growing cedar and cypress.  Cormorants, stilts, and a solitary grey heron busied themselves at the water’s edge, looking for the day’s first meal. Gorgeously coloured shells in every hue of orange lay decorating the sand, which was also strewn with strangely carved pebbles, black as jet. Alongside these, there were some peculiar-looking tracks that I had never encountered before and the waters of a stream with leafy banks rushed down to join the sea.  Utterly enchanted by the beauty of the scene, I returned to Laganas every two or three years to enjoy it all over again.

In 1980, with a growing sense of dread, I witnessed the swift and anarchic development of facilities for tourism as they began to encroach on the pristine beaches and hitherto unsullied dunes of the bay.  Two years later, as I sat in a doctor’s waiting room, my eye fell upon the cover of a magazine: “The sea turtles of Zakynthos” the title read. That is how I became aware that the beaches of Laganas Bay are the nesting ground of endangered sea turtles and the place where they come to lay their eggs.  I realised what the consequences would be for the turtles if their habitat were to be destroyed.  Almost immediately I began to work to protect them.  Initially I struggled almost alone and without any specialist knowledge.  My only real helpers were my commitment, stubbornness, willpower, and hard work but also an equal and enduring love for the place and the creatures that depend on it for their survival.   My battle for the turtles of Laganas Bay has gone on since that day.  Six years later, in 1988, I founded MEDASSET (the Mediterranean Association to Save the Sea Turtles), initially in England, where I was living at the time, and then, in 1990, in Greece also.  In 2018, MEDASSET celebrated its 30th anniversary.  After many struggles for the protection and study of these charismatic animals and their habitats throughout the Mediterranean, the results of our work have been acknowledged and honoured globally with prizes and commendations, giving the MEDASSET team the strength to continue with its mission.

It has to be said that the bay of Laganas is no longer the place I once knew. Its azure waters, its lily-decked dunes, and the effortlessly magical beauty of its beaches have all suffered the consequences of callous, indifferent and thoughtless human pressures. It has been to the detriment of the natural environment and of beauty, which is life itself.  Even the sea turtles have noticed: in recent years, some of the hundreds of them that used to nest on the beaches of the bay have chosen other destinations.

And yet.  Laganas Bay must be protected.  Not only for the turtles but for mankind also: the immediate area’s natural environment – and that of the whole island too – is what draws thousands of visitors to Zakynthos every year.  We have to leave to future generations the legacy that we have an obligation to pass on to them – that of the ‘privilege’ of encountering for themselves something of the beauty that changed my own life so dramatically, 46 long years ago.

Member of the IUCN – International Union for the Conservation of Nature