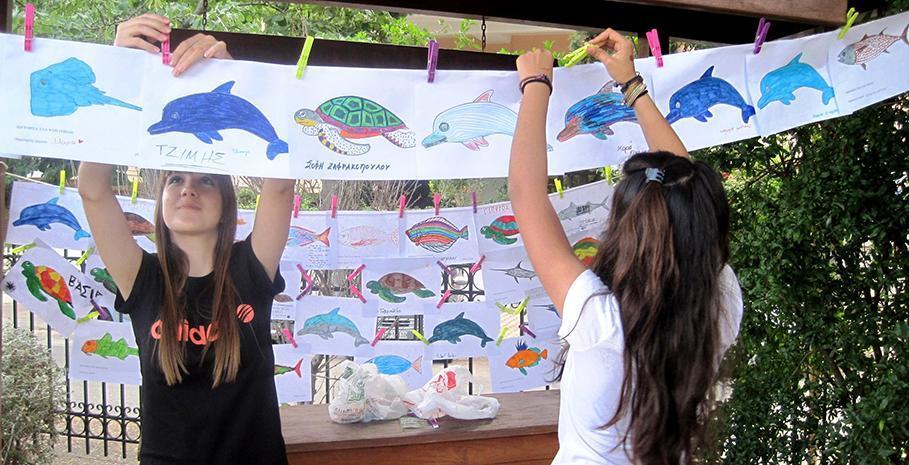 Greece 2013: A year filled with environmental action by young people

For 25 years, MEDASSET has been working closely with educators and students to convey the message that cooperation and active participation are needed if we are to achieve our aim of conserving sea turtles and their habitats throughout the Mediterranean for the future. In 2013 we engaged over 6,400 pupils from 116 schools in this endeavour!

Getting young people interested in sea turtles
Our mascot, Niretta, proved to be an extremely useful tool in successfully conveying the message about the need to save our ancient mariners from extinction. In 2013, with the valuable contribution of a highly energetic team of volunteers, our award winning “Niretta the Caretta” programme visited 27 schools in Athens, met with 800 pupils and spoke to them about sea turtle conservation. MAD TV, a very popular station among young people, welcomed Niretta to their studios, providing us with an opportunity to promote our campaigns concerning sea turtles and their plight in a fun way.

Getting students to turn their knowledge into practice
In October 2013, throughout the “Join in & Clean up” campaign, 2,541 pupils and educators helped clean up 12 beaches throughout Greece, actively showing their concern for the marine environment. Acting as young citizen- scientists, the students collected valuable data by recording each piece of debris found and removed from the beach. The “Join in & Clean up” campaign is run by MEDASSET and the environmental programme Mission Water of the Coca-Cola System in Greece (Coca-Cola HBC and Coca-Cola Hellas) under the auspices of the United Nations Environment Programme (UNEP/MAP), for the 3rd year in succession.

Giving young people a chance to speak out about our fish stocks
From October 2012 to December 2013, MEDASSET coordinated the interactive Paint a Fish campaign in Greece. The creative campaign aimed at educating and mobilising the younger generation to speak out in favour of sustainable fisheries. Paint a Fish was timed with the final stages of the reform of the European Union Common Fisheries Policy (CFP) – a ‘once in 10years’ opportunity to lay the foundations of sustainable fisheries in Europe. During the final stages of the reform, a Paint a Fish booklet was put together to be given to EU leaders, reminding them to support the restocking of our seas by voting to end overfishing. Schoolchildren created colourful Paint a Fish postcards that were sent to 22 Greek Members of the European Parliament, asking them to vote in support of our fish stocks! The Paint a Fish website collected over 32,000 fish paintings from European countries and beyond, calling on EU leaders to restore our seas by returning fish stocks to their maximum sustainable yield (MSY.).