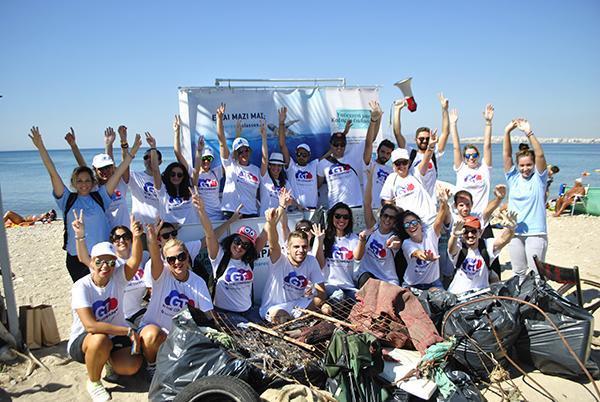 This year and always, through taking action in ten simple ways, through showing respect and taking personal responsibility, we can keep our beaches clean and our seas brimming with life. Let’s take a look at what was achieved last Summer as a result of our “Clean Seas: Swear to Care” campaign…

Five hundred and ninety sea lovers have already made their promises on the dedicated website: www.katharesthalasses.gr/en

Using the hashtag #SwearToCare, our Facebook friends have been sharing photos of their beach-cleaning actions all over Greece, and spreading the message about the need to protect our shores to their social media contacts. Our Facebook group already has more than 1,100 members, and it’s growing.

Using the slogan “We care for our host destinations. Will you join us?” we invited businesses connected with the tourist industry to become active members of our campaign. KOURMAS at Limeni in Upper Mani region, COSTA NAVARINO in Messinia, GRANDE BRETAGNE and KING GEORGE hotels in Central Athens, and NEW AEGLI hotel in Poros have all responded with enthusiasm. Hotel members in particular are valuable allies in the task of spreading the word about the vital importance of clean seas to their guests and they have been taking their own initiatives to enhance the protection of our shores.

Prominent among our supporters are also some environmentally responsible businesses that have been encouraging their employees to make their own pledges and to go one step further by also taking action! So, in collaboration with the staff of Grant Thornton we cleaned up a popular beach in the near Athens, carting away 100 kg of rubbish. Pledges have also been made by other organisations, such as the online sailing magazine, SKIPPER ON DECK, and the young people’s volunteering platform, GloVo, who immediately decided to organise their own beach clean-up.

The campaign’s message was spread nationwide by radio and television. These media, which broadcasted our public service announcement (PSA) for two whole months in Greece featuring our celebrity Campaign Ambassadors, made a great contribution to our campaign. The PSA was also showed in screens on the Athens metro stations thanks to the collaboration of the Urban Rail Transport SA. Alpha Bank showed it on screens in 120 of its branches. With the support of Intelligent Media, it was also screened in private clinics across Greece. The Athens International Airport offered us five projection locations at the airport. Our awareness-raising PSA has now been viewed by over 6,850 friends on our YouTube channel and Facebook. The positive feedback by so many people have been making have us jumping for joy.

You, too, can make a promise:
Never to leave litter on the beach or throw it into the sea
Never to “hide” your rubbish by burying it in the sand
Never to drop cigarette butts on the beach

If never, then you’re with us… for ever!
Visit www.katharesthalasses.gr/en to choose the promises you feel you can make… and keep.

Matrimony: Us and the Seas

Press release: Swear to care for the Greek Seas, whether you are visiting now or you dream to one day

“Healthy Seas”: A year’s journey from waste to wear