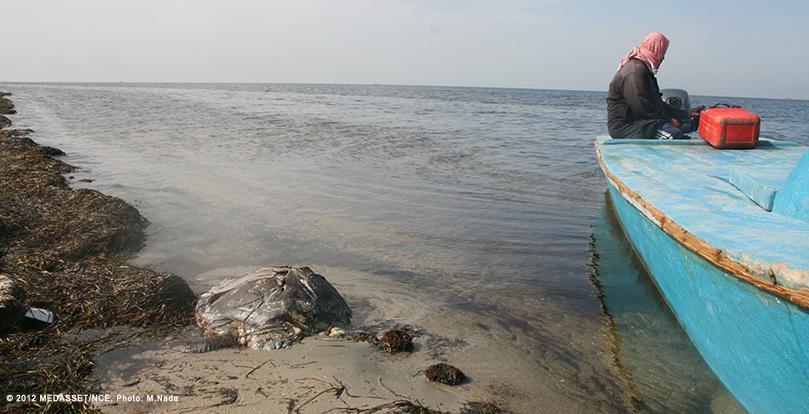 In October 2012 Egyptian NGO Nature Conservation Egypt (NCE) alerted us about news of “mass deaths of sea turtles” in Bardawil, a semi-enclosed coastal lagoon in North Sinai, Egypt. In response, our Egyptian representative Dr. Mohamed Nada worked with NCE, local scientists and authorities to visit the remote wetland and survey the area to get a first-hand view of the situation. A grant from the British Chelonia Group covered the survey costs and the subsequent data analysis.

During 2013 we worked with the survey team to put together all the available information with the aim to clarify the scale of the sea turtle mortality and the possible causes. We present our findings in an in-depth report that we published in December 2013: “Egypt’s Bardawil Lake: safe haven or deadly trap for sea turtles in the Mediterranean?”. The report announcement, available on our website, provides an overview of the main conclusions and recommended measures.

As in many cases, there are several underlying reasons fueling the documented fisheries vs. turtles conflict: low awareness and lack of participatory decision making, unsustainable livelihoods and poverty, lack of effective control and law enforcement, poor management of the wetland and its fisheries, which in turn generate overfishing and hence competition between man and turtle. This study also puts Bardawil on the map among other sea turtle feeding grounds in the Mediterranean and calls for further research.

On 24 February 2014, NCE and MEDASSET jointly organised a meeting in Cairo to present the report to stakeholders and discuss next steps that will safeguard this important Mediterranean wetland and protect sea turtle populations in these waters. Find out more about the meeting results by clicking here. The meeting was hosted by the British Council and was attended by MEDASSET’s Director with the kind support of EgyptAir.