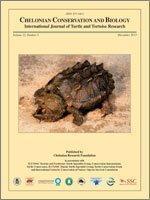 We are pleased to announce the release of a new paper: Population Structure for Sea Turtles at Drini Bay: An Important Nearshore Foraging and Developmental Habitat in Albania, by M. White, L. Boura and L. Venizelos. The paper was published in December 2013 in the Chelonian Conservation and Biology journal, Issue 2 of Volume 12 (pp. 283-292). For a preview click here. To download the full article click here.

This paper stems from the 3-year collaborative project that we implemented in 2008-2010 to monitor sea turtles in Drini Bay, Albania. It follows several previous papers and reports presenting project results. This paper provides a method of utilising morphometric data to understand population structure and a practical way of identifying the development of secondary sexual characteristics from external features, combining carapace and caudal measurements. We take the opportunity to once more acknowledge and thank project partners and funders. Following this project, in 2012 Albania adopted a national sea turtle action plan which MEDASSET prepared in consultation with experts, the country continues working to protect sea turtles through policies and projects such as NETCET, and several students trained via the project have also followed careers in sea turtle or environmental research and conservation.

Abstract
Loggerhead sea turtles Caretta caretta using an important shallow-water foraging ground at Drini Bay, Albania, were monitored over 3 consecutive summers (2008–2010). Working closely with local artisanal fishermen, researchers were able to obtain many of the sea turtles captured as bycatch (nontarget species). There were 407 new records (402 loggerhead and 5 green turtles, Chelonia mydas), with most (99%) being captured in 2 stavnike fish traps (a type of pound net) and a few with mrezh (gill nets). Morphometric data were collected from all captured turtles, and they were allocated into 10-cm size classes (length-frequency-distribution) based on their curved carapace length; caudal measurements were used to assess the developmental-stage of secondary sexual characteristics. An unusually high number of male loggerhead turtles (27%) were captured; their morphometric data were subsequently used as a reference for determining if short-tailed turtles might be adult or sexually developing females. Nesting has not been reported for Albania, so the presence of females is unclear. Drini Bay is also a developmental habitat, as 69% of the studied turtles were yet to mature. Interannual recaptures of 26 turtles allowed their incremental growth rate to be calculated.
Received: March 4, 2012; Accepted: December 27, 2012.