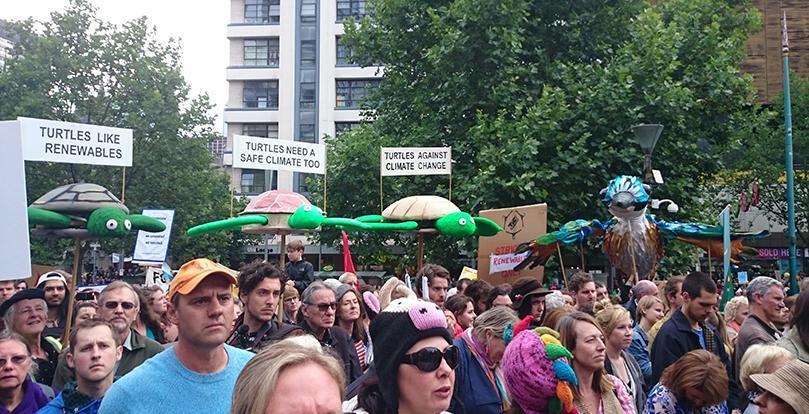 Thousands marched through Melbourne’s city centre in one of many climate change protests around the world. Photo: Melissa Davey, The Guardian

The 2015 Paris Climate Conference, also known as COP21 is here. Negotiators, ministers and heads of state will gather in Paris to finalise the framework through which the world will seek to reduce carbon pollution and tackle climate change after 2020. The world’s leading scientists have warned that global warming of 2°C or more above pre-industrial levels will result in irreversible and catastrophic consequences. This includes consequences for sea turtles in the Mediterranean.

Momentum is the key word and it is building. This year we have seen greater agreement on acting on climate change – the US-China announcement, oil and gas companies asking for consistent climate policy, the G7 calling for decarbonisation and the Pope’s Encyclical. The diversity of voices has never been greater. So while a global agreement is likely, what it looks like will be the question.

Ahead of Paris, all countries have been asked to outline their initial scope of action after 2020. The pollution reduction targets announced should show how they are consistent with avoiding 2°C of warming. These post-2020 targets are countries’ initial offers and while positive, even if fully implemented, the world is still on course for 2.7°C warming. The Paris agreement will not come into force until 2020, and so between now and 2020 these targets will be reviewed and scrutinised globally. This includes a ‘ratchet’ mechanism to routinely improve the strength of targets over time. The European Union is well-placed having already achieved above their 2020 target and an agreement for a 2030 target of “at least” 40% gas reductions compared to 1990 levels. However countries such as Australia need to lift their ambition.

The ‘argy-bargy’ of negotiations will centre on national pledges, an agreed long-term goal, how to hold countries to account, ways to increase ambition over time and climate finance. The issue for developing countries is money as they will suffer the brunt of damage to the climate. As well as having restrictions on the economic growth off the back of burning fossil fuels that developed countries have enjoyed. A Climate Fund of $100billion a year by 2020 is already set to be scaled up.

What do we need for the Mediterranean Sea?

Stretching for 46,000 kilometres, the white sandy beaches and sparkling waters of the Mediterranean Sea only make up 1% of world oceans. But what it lacks in size, it makes up for in diversity – the Mediterranean counts over 10% of all known species, has the second highest percentage of endemic species in the world and is home to several endangered marine species like the green sea turtle (Fache and Sadik, 2015).

“Global change is happening, and it is happening fast. The only certainty we have is that marine ecosystems will be different, but we still do not know to what extent.” said Richard Sempéré, CNRS researcher and director the Mediterranean Institute of Oceanology (MIO) and presenter at the Our Common Future Under Climate Change conference.

We can help to protect sea turtles, but we’ll lose this opportunity if we don’t tackle climate change

Sea turtles already face significant threats to the viability of their populations such as commercial fishing, encroachment on nesting areas, boats, litter, pollution, illegal harvesting of eggs. Climate change places sea turtles under greater threat as it affects the climate under which all ecosystems exist.

What can you do?

Watch This Changes Everything