The Mediterranean Sea is a biodiversity hotspot of high importance worldwide and hosts significant sea turtle [1] populations across its range for mating, nesting, as well as for feeding and wintering of adult, sub-adult and juvenile individuals. As the largest semi-closed basin on our planet surrounded by 23 countries with a total coastline length of 46.000 km, consequently sea turtle strandings occur every day across the Mediterranean, either alive, injured or dead. It is important that these incidents are managed and recorded.

To date, some Mediterranean countries have a National Stranding Network that use a specific protocol for recordings, whereas others operate independently, applying different protocols within the same region. The necessity of the elaboration of a Pan-Mediterranean Stranding Protocol and Database has been identified as a priority, for data collection regarding sea turtles of the Mediterranean [2]. MEDASSET [3] perceiving this necessity and priority, with the aim of conserving these emblematic creatures, organised a workshop on 24th & 25th February in Athens with representatives from international organisations, ministries, research institutes and NGOs from nine Mediterranean countries: Italy, Greece, Croatia, Turkey, Lebanon, Israel, Libya, Tunisia and Algeria. The key aspect of this meeting is the significant role of the representatives who are directly involved with national networks or in the collection of data in their country, as well as the prominent participation of the Regional Activity Centre for Specially Protected Areas (RAC/SPA) and Regional Activity Centre for Information and Communication (INFO/RAC) of UNEP/MAP. The workshop was chaired by Dr Flegra Bentivegna and the opening speech given by MEDASSET’s President, Lily Venizelos.

The purpose of the interactive meeting was: a) to present and discuss the results of our survey with the invited experts, as MEDASSET had distributed a questionnaire and b) to formulate the first Draft for the common Mediterranean Protocol and discuss about the technical specifications of the Database, thus setting the first steps in the implementation of the common objective. As a result, the Draft will be sent to RAC/SPA, with a view to its finalisation and adoption by the Mediterranean countries in the foreseeable future. In addition, the Pan-Mediterranean Stranding Protocol and Database will contribute to the exchange of scientific knowledge on the causes of injuries and deaths, to further understand and deal with anthropogenic threats such as marine pollution, entanglement in fishing gear etc on a regional wide scale. The second day was dedicated to a visit to ARCHELON’s Rescue Centre in Glyfada.

The new scientific project will contribute to the formulation and development of a Mediterranean network of all directly involved in national stranding networks and countries developing them throughout the Mediterranean. This will add to the optimal collection of data applying a common standardised method through a harmonised approach, hence overcoming the intercontinental characteristic of the sea and migratory life history strategy of sea turtles. The project is being implemented by MEDASSET and is part of a larger Mediterranean project that is funded by the MAVA Foundation [4]. 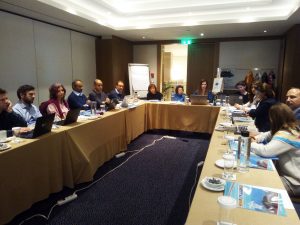 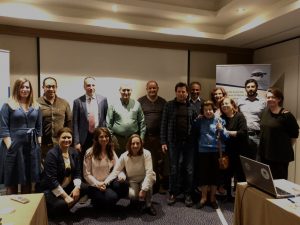 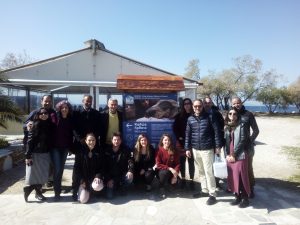 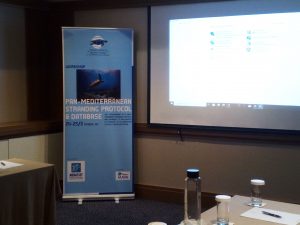 [1] Three of the seven species of sea turtles are found in the Mediterranean. The loggerhead (Caretta caretta) and green turtles (Chelonia mydas) nest here, and the huge leatherback (Dermochelys coriacea) is an occasional visitor. All species are included on the IUCN Red list of threatened species. Sea turtles are cold-blooded, air breathing, egg laying reptiles that spend their mysterious lives at sea but return each summer to the same area they were born to deposit their eggs in the sand. They take 20-30 years to mature and may live up to 100 years. Despite having travelled the world’s seas since the age of the Dinosaurs, their survival is threatened due to coastal development, pollution, collision with vessels, fisheries and climate change.

[3] With roots back to 1983, MEDASSET was founded in 1988 in England and 1993 in Greece. It is an international NGO registered as a not-for profit organisation in Greece. MEDASSET plays an active role in the study and conservation of sea turtles and their habitats throughout the Mediterranean, through scientific research, environmental education, lobbying relevant decision makers and raising public awareness. The organisation is a partner to the United Nations Environment Programme’s Mediterranean Action Plan (UNEP/MAP) and a Permanent Observer-Member to the Bern Convention, Council of Europe, since 1988.

[4] The “Development of a Mediterranean stranding protocol and database” is implemented by MEDASSET in collaboration with Dr. Flegra Bentivegna with funding from the MAVA Foundation. The survey is part of the project “Conservation of marine turtles in the Mediterranean Region“ which is being implemented by ARCHELON, DEKAMER, MEDASSET, MedPAN, NMPZ, RAC/SPA (lead partner), WWF Greece, WWF Turkey.