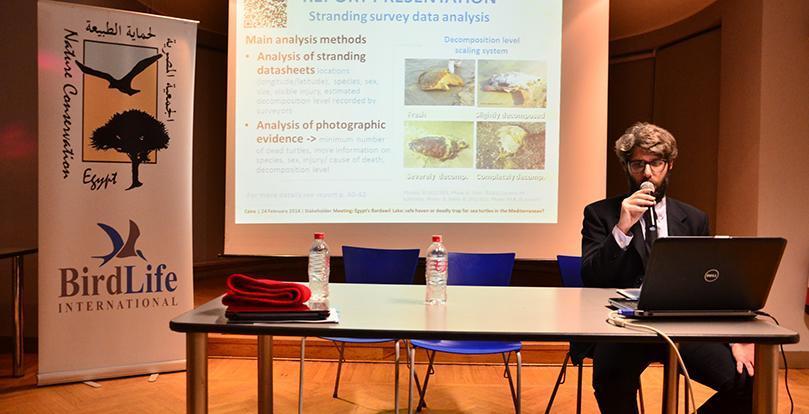 The meeting took place on 24 February 2014 at the British Council and was organised by international NGO MEDASSET[2] and Egyptian NGO Nature Conservation Egypt[3]. It follows the release of the report entitled ‘Egypt’s Bardawil Lake: safe haven or deadly trap for sea turtles in the Mediterranean?’ in December 2013,[4] published by the two NGOs in collaboration with Dr. M. El-Alwany of the Suez Canal University[5] and local staff of the national fisheries (General Authority for Fish Resources Development) and conservation authorities (Nature Conservation Sector).

Conservationists, researchers and decision makers attended the meeting to discuss the cause and solutions to sea turtle mortality in Bardawil, which was documented in 2 October-3 November 2012. According to the research team 80–100 sea turtle carcasses were found in the one-month period. “The vast majority were loggerheads (Caretta caretta); however, a few green sea turtles (Chelonia mydas) and one leatherback (Dermochelys coriacea) were also identified” said Mr. Kostis Grimanis, Director of MEDASSET. “Most importantly, we confirm that there was no single, simultaneous mass stranding event; we estimate that the turtle deaths occurred over at least 6 months, possibly longer. Nonetheless, 16 of these died in just one month, which is a cause of concern” noted Mr. Grimanis. “The data show that Bardawil may be an important year-round marine habitat for sea turtles, which was previously not known” Mr. Grimanis explained. Till now, scientists were aware of sea turtles nesting in low numbers during the summer on the outer sandy Mediterranean shores of Bardawil.

In the absence of necropsies and toxicological tests researchers could not safely define why turtles are dying in Bardawil. Natural causes or litter ingestion cannot be ruled out. “At least five of the freshly dead turtles were intentionally killed, we cannot say much about the rest as they were too decomposed”, noted Dr. Mohamed Nada, member of MEDASSET and NCE who participated in the fieldwork. “Interviews with fishermen revealed that there is an overall hostile attitude towards sea turtles, which they attributed to the damage turtles are causing to their fishing gear” said Dr. Nada. “Human consumption of turtle meat was reported in interviews, but it is not widespread and does not appear to be directly linked to the mortality” added Dr. Nada, who has conducted extensive research on this topic.

“The high sea turtle mortality and the fisheries conflict are an indicator that there is lots of room for improvement in the field of conservation and management of this Ramsar site”, remarked Dr. Magdy El-Alwany, from the Marine Biology Department of the Suez Canal University.

A number of conservation and management measures to tackle the sea turtle mortality and improve the protection of the wetland were presented and discussed among participants. Several participants mentioned the need for more research and monitoring to take place in the lake. “More research and field surveys can fully document the importance of the wetland as a feeding, wintering and development habitat for sea turtles in the Mediterranean, their interaction with the lake’s fisheries, and monitor mortality levels and causes” highlighted Dr. Mostafa Fouda, Vice-president of NCE. “Awareness-raising and discussion at the community level is urgently needed, coupled with improved law enforcement and surveillance” stressed Dr. Fouda.
At the root of these problems, researchers identify the problematic environmental and fisheries policies which are currently dealing with marine biodiversity protection and fisheries productivity in isolation of each other and are lacking a coordinated and integrated approach. “In order to successfully manage and maintain both the economic and the ecological aspects of Bardawil, policy makers need to implement bottom-up, ecosystem-approach management and regulation in a coordinated and inclusive manner” pointed out Dr. Mohamed Nada. Some participants supported the need for national declaration of the whole site as a (marine) protected area should also be considered by authorities in consultation with local stakeholders.

Eng. Waheed Salama, Director of the Biodiversity Department of the Nature Conservation Sector of the Egyptian Environmental Affairs Agency (EEAA), highlighted the importance of conserving Bardawil Lake and sustainable use of its resources. Eng. Salama added, “the General Authority for Fisheries Resources Development (GAFRD) has expressed its concern over the recent ecological imbalance in Bardawil that has increased the percentage of shrimps and crabs as opposed to the other target species. Efforts are currently being coordinated between the GAFRD and the Nature Conservation Sector of the EEAA, to restore balance to the lake, bearing in mind the need to conserve sea turtles in Bardawil Lake.”
The meeting concluded that improved conservation of Bardawil is significant and is a matter of urgency not only in terms of its unique biodiversity, but also in relation to the communities it supports, which currently have very limited livelihood options and depend on the wetland for their subsistence.
The meeting was supported by the British Council, EgyptAir and the British Chelonia Group.

[1] All three sea turtle species found in the Mediterranean are endangered due to human activities and as such are protected through international and national legislation. It is estimated that only about 339-360 green and 2.280-2.787 loggerhead females nest in the Mediterranean. Sea turtles have outlived the age of the dinosaurs, are cold-blooded, air breathing reptiles that spend their lives at sea but return to the same area where they were born to deposit their eggs in the sand. Being a migratory species, sea turtles use numerous habitats across the Mediterranean throughout their long life cycle (they can live up to 100 years), and are therefore a shared responsibility of all coastal countries.
[2] Founded in 1988, MEDASSET is an international environmental non-governmental organisation (NGO) registered in the UK and in Greece. MEDASSET plays an active role in the study and conservation of sea turtles and their habitats throughout the Mediterranean, through scientific research, environmental education, lobbying and raising public awareness. Since 1988 MEDASSET is a Partner to the Mediterranean Action Plan (MAP) of UNEP and a Permanent Observer-member of the Bern Convention at the Council of Europe. In 2009, MEDASSET was awarded Partner status for the implementation of UNEP/MAP’s Action Plan for the Conservation of Marine Turtles in the Mediterranean
[3] Nature Conservation Egypt (NCE) is a NGO that is dedicated to the conservation of Egypt’s natural heritage and the promotion of its sustainable use for the benefit of the present and future generations. NCE is a Birdlife International affiliate.
[4] Direct link to report
[5] Suez Canal University was established in 1976. Its Department of Marine Science was established in 1982 and has grown rapidly to become a multidisciplinary department focusing on both teaching and applied research in marine science and aquaculture.
Dr.MohamedNADA_Expert_MEDASSETRepresentative&NCE_Member
Dr.MostafaFOUDA_Nature Conservation Egypt_NCE_Vice President
Mr.KostisGRIMANIS_MEDASSET_Director
WaheedSALAMA_DirectorBiodiversityDepartmentNature ConservationSectorEgyptianEnvironmentalAffairsAgency