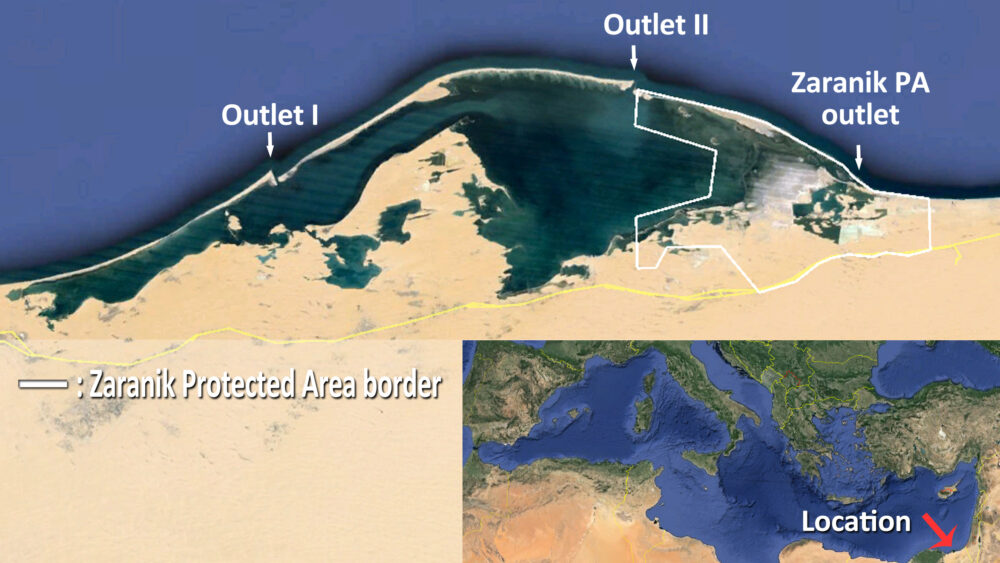 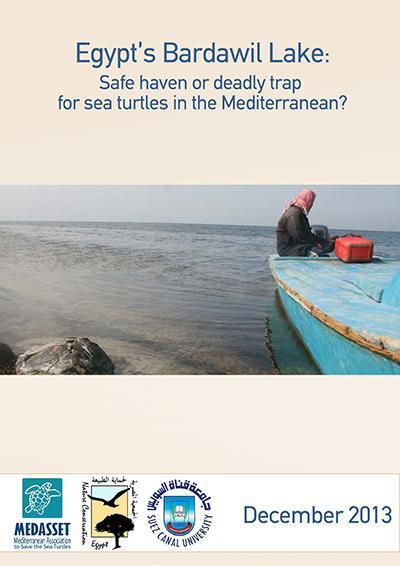 20 December 2013: Bardawil lagoon in North Sinai, Egypt, is a unique Mediterranean semi-enclosed coastal water body that is listed among the Ramsar Wetlands of International Importance. Its eastern section – the Zaranik Protected Area – was afforded national protection in 1985 and is renowned worldwide as a key habitat for migratory birds.

In response to news in October 2012 of “mass deaths of sea turtles” in Bardawil lagoon, a two-day survey was carried out in November 2012 by researchers of NGOs MEDASSET[1] and Nature Conservation Egypt[2] in collaboration with Dr. M. El-Alwany of the Suez Canal University[3].

Staff of the local fisheries authority (General Authority for Fish Resources Development) and of the Zaranik Protected Area, who first documented the sea turtle carcasses, also participated in the survey. A joint report entitled “Egypt’s Bardawil Lake: safe haven or deadly trap for sea turtles in the Mediterranean?” (December 2013), presents the survey findings and recommended conservation action. The peer-reviewed report can be downloaded at www.medasset.org[4]. The survey and subsequent data analysis was enabled thanks to funding from the British Chelonia Group.

SUMMARY OF FINDINGS
Among the 80–100 sea turtles found dead on the shores of Bardawil lagoon, researchers identified all three species of sea turtle found in the Mediterranean: the vast majority of the strandings were loggerheads (Caretta caretta); however, a few dead greens (Chelonian mydas) and one leatherback (Dermochelys coriacea) were also identified[5]. The report concludes that there was no single, simultaneous mass stranding event. Instead, the sea turtle carcases accumulated along the lagoon shores during an extended period of time, of at least 6 months, possibly longer.

With regard to cause of death, the report identifies the most likely causes which need to be monitored further. Although human-induced mortality remains the largest threat to sea turtles worldwide, natural causes cannot be ruled out. Algae blooms and pollution, with the exception of marine litter, do not appear to be a likely cause of death in this case, but these need to be closely monitored. Human consumption of turtle meat was documented in interviews, but this is not considered widespread and does not appear to be directly linked to the mortality levels. As in most areas of the world, fishing activities in Bardawil seem to be the most probable cause of the high number of sea turtle deaths. Interviews with fishermen revealed the occurrence of boat collisions with turtles within the lagoon, and these may have been responsible for some of the deaths. These interviews also revealed that some fishermen may be killing sea turtles intentionally. Physical evidence supporting this was scarce, although 5 of the 16 relatively fresh carcasses found during the November survey showed evident signs of intentional killing (head removal or strike). There were also some claims that illegal poisoned baits were being used to kill turtles, however no physical evidence was found to support this. The interviews documented a generally hostile attitude of the fishermen towards sea turtles, and this is attributed to lack of awareness regarding the endangered status of the species, and the conflicts that arise when turtles interact with the lagoon fisheries, for example causing damage to fishing gear.

Of particular interest to both the scientific community and conservation management professionals is the new information that this report contributes regarding the presence of sea turtles within the wetland. A few female loggerhead and green sea turtles had been known to nest outside the wetland, on its sandy Mediterranean shores, during the summer. This report reveals that sea turtles of different age classes (adults and subadults) of both sexes seem to enter the lake throughout the year (via its three outlets to the Mediterranean Sea), in order to feed, grow, and/or overwinter. Fishermen also claimed to have observed mating activity within the lagoon, and reported a perceived rise in sea turtle numbers in the lake in relation to the past; however, these claims require further scientific validation.

CONSERVATION AND POLICY IMPLICATIONS
A number of conservation and management measures are described in the report based on the survey findings, which are urgently required in order to raise awareness, and to effectively monitor and deal with sea turtle mortality in Bardawil. In addition, the report argues that the high levels of sea turtle mortality and the identified fisheries conflict are an indicator of unsuccessful conservation and management of this Ramsar site. At the root of these problems are the existing institutional structures and the current national fisheries and environmental policies that have failed to successfully manage and maintain both the economic and the ecological aspects of Bardawil in a coordinated and inclusive manner.

The report supports existing calls for urgent action to improve the overall protection of the wetland and further suggests the implementation of bottom-up, ecosystem-approach management and regulation. National declaration of the whole site as a (marine) protected area should also be considered by authorities in consultation with local stakeholders, the aim being to safeguard Bardawil’s high ecological and socio-economic value for the local community, Egypt and the wider Mediterranean.

NEXT STEPS
An event will be organised in Cairo in early 2014 at which the report findings will be presented and discussed. Pre-registration to the event is via email to medasset [at] medasset.org

[1] Founded in 1988, MEDASSET is an international environmental non-governmental organisation (NGO) registered in the UK and in Greece. MEDASSET plays an active role in the study and conservation of sea turtles and their habitats throughout the Mediterranean, through scientific research, environmental education, lobbying and raising public awareness. Since 1988 MEDASSET is a Partner to the Mediterranean Action Plan (MAP) of UNEP and a Permanent Observer-member of the Bern Convention at the Council of Europe. In 2009, MEDASSET was awarded Partner status for the implementation of UNEP/MAP’s Action Plan for the Conservation of Marine Turtles in the Mediterranean
[2] Nature Conservation Egypt (NCE) is a NGO that is dedicated to the conservation of Egypt’s natural heritage and the promotion of its sustainable use for the benefit of the present and future generations. NCE is a Birdlife International affiliate.
[3] Suez Canal University was established in 1976. Its Department of Marine Science was established in 1982 and has grown rapidly to become a multidisciplinary department focusing on both teaching and applied research in marine science and aquaculture.
[4] Direct link to the report
[5] All three sea turtle species found in the Mediterranean are endangered due to human activities and as such are protected through international and national legislation. It is estimated that only about 339-360 green and 2.280-2.787 loggerhead females nest in the Mediterranean. Sea turtles have outlived the age of the dinosaurs, are cold-blooded, air breathing reptiles that spend their lives at sea but return to the same area where they were born to deposit their eggs in the sand. Being a migratory species, sea turtles use numerous habitats across the Mediterranean throughout their long life cycle (they can live up to 100 years), and are therefore a shared responsibility of all coastal countries. The health and size of a sea turtle population may serve as a useful indication of the health of marine and coastal habitats.