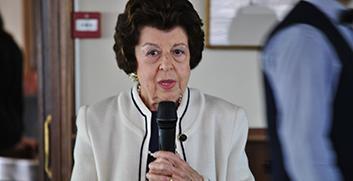 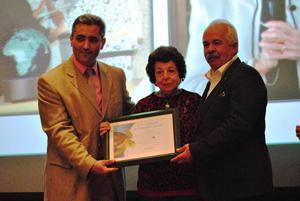 27 April 2015: Lily Venizelos, President and Founder of MEDASSET was presented with a Lifetime Achievement Award in recognition of her accomplishments in the field of sea turtle conservation. The award was made by the International Sea Turtle Society during the 35th annual International Sea Turtle Symposium in Dalaman, Turkey, which took place between 18 and 25 April, 2015.

The award comes as a tribute to 32 years of work on behalf of the Mediterranean’s sea turtles. It represents the highest honour the marine turtle conservation community can bestow and is awarded by a committee composed of professionals in the fields of biology and species preservation who are internationally active in the effort to save these vulnerable animals.
Venizelos stated: “I feel particularly honoured to be recognised. With MEDASSET, we have fought significant battles for the survival of these endangered flagship species for many years, throughout the Mediterranean. Furthermore we have been doing so in the face of human actions and greed that seem to take no account of the right of other forms of life to exist.” She added “This award simply reinforces our sense of responsibility and makes us determined to continue our work to protect marine ecosystems and biodiversity.”
MEDASSET was actively involved in the organisation of the 35th Annual Symposium, putting on activities for both adults and children.

Founder and President of MEDASSET, conservationist Lily Venizelos, has devoted over three decades to the conservation, study and protection of sea turtles and their habitats throughout the Mediterranean. She is a Member of IUCN-Species Survival Commission: Marine Turtle Specialist Group. In 1987, in recognition of her conservation efforts, she received one of the first UNEP – United Nations Environment Programme, ‘Global 500’ Awards and has received various national and international awards and distinctions since.

Founded in 1988, MEDASSET (Mediterranean Association to Save the Sea Turtles) is an international environmental NGO registered as a charity and limited liability company in the UK and a Permanent Observer-Member to the Bern Convention, Council of Europe. MEDASSET is working closely with MEDASSET Greece – a not-for-profit organisation established in 1993 in Greece, which is a partner to the UN’s Mediterranean Action Plan (UNEP/MAP). Both organisations are active in the study and conservation of sea turtles and their habitats throughout the Mediterranean. Common goals are achieved through scientific research, environmental education, lobbying relevant decision makers, and raising public awareness.