Press release: Swear to care for the Greek Seas, whether you are visiting now or you dream to one day 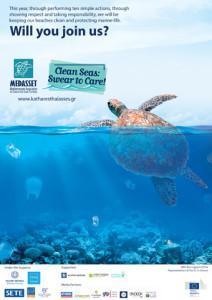 Athens, 15 May 2015: Swear to care for the Greek Seas, whether you are visiting now or you dream to one day

A new environmental action campaign has just been launched, aimed at everyone that will be going to a beach in Greece, encouraging each of us individually to monitor our own behaviour – through the simple power of making a promise!

Voluntary beach clean-ups, such as those that have frequently been organised over the past years throughout Greece, served to highlight the problem of litter at sea. But although as individuals we may be aware of the issue, many of us don’t take part in such organised voluntary actions.
MEDASSET’s new campaign Clean Seas: Swear to Care aims at mobilising people so that less rubbish finds its way into the sea, while at the same time shining a spotlight on some basic values – like showing respect for others and taking responsibility for our own actions – that seem to have fallen off our everyday agenda. The promises people make will be recorded on a dedicated webpage (www.katharesthalasses.gr). The campaign team will help the public keep their promise through use of its network, activities and wide reaching promotion campaign.
Using the motto “We care for our host destinations”, the campaign places particular emphasis on the protection of tourist destinations, and invites the businesses active in the tourism sector and located by the sea, to join its network.
Mr Panos Carvounis, Head of the Representation of the European Commission in Greece, which supports the campaign, made the following statement: “Our country is surrounded by seas. In protecting coastal, marine, and deep water environments we are protecting the future of our children. It also makes business sense since, as a country, we depend economically on our seas and related tourism activities”.

Antonis Tsapatakis (Paralympic swimming champion), Tamta (singer/performer) and Chronis Damalas (prizewinning chef) have already pledged their support and, as ambassadors of the campaign, will be spreading the word to their fans through social media.

Other supporters of the campaign include: The Travel Foundation in the UK, ASAP Athens, Alpha Bank, Dolphin Capital Foundation, Ally, Do it Eco project, EcoTourism-Greece, Greek Travel Pages, Quality Net Foundation, Capital Link, Athens Voice, epixeiro.gr, onecon.gr, and Skipper OnDeck.
The campaign Clean Seas: Swear to Care is being held under the auspices of the Hellenic Republic Ministry of Tourism, the Greek National Tourism Organisation, the Greek Tourism Confederation, the Hellenic Association of Travel and Tourist Agencies and the Central Union of the Greek Chambers of Commerce. It is also supported by the Representation of the European Commission in Greece.
This year, through performing ten simple actions, through showing respect and taking responsibility, we will be keeping our beaches clean and protecting marine life. Will you join us?
Images available at: https://www.dropbox.com/sh/xecmdliveju72zw/AACQ_RRixubBnYoGsqDwg7t3a?dl=0