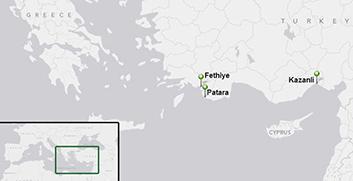 MEDASSET draws the attention of responsible authorities to the urgent need of improved management of sea turtle nesting beaches in Kazanli, Patara and Fethiye (see map below). There are several examples of successful sea turtle habitat management in Turkey, however in these three sites there has been very little or no improvement to date, with evident impacts on the habitats and species.

In Kazanli, the endangered green turtle (Chelonia mydas) nesting beach continues to be threatened by coastal erosion and by the 1.5 million tonnes of hazardous toxic waste next to the beach, which has not yet been neutralised and removed by the Kazanli soda-chromium factory. Patara and Fethiye form important loggerhead turtle (Caretta caretta) nesting habitats and are both protected under the Barcelona Convention as Specially Protected Areas. In Patara, plans for the construction of 300 villas inside the protected zone and the current inadequate management of the projected increased influx of tourists could damage the natural site and increase disturbance to sea turtles and their nests. In Fethiye, the lack of management of tourism activities and coastal development has resulted in the severe decline of nesting levels and habitat damage. In addition, authorities are promoting the construction of a shipyard on of Fethiye’s nesting beaches, although such a development is clearly inappropriate and incompatible with the protected status.

These problems have repeatedly been raised through the Bern Convention, which in December 2013 decided to closely monitor the situation and encourage authorities to take steps to improve conservation. In its reports, MEDASSET offers conservation authorities detailed recommended measures that will safeguard these unique habitats for the future viability of sea turtle populations in the Mediterranean. Leadership and commitment by decision makers at all levels is urgently needed to ensure that concrete action is taken without further delay.

The letter is available here.