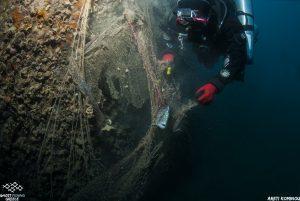 The second phase of a dive funded by the European initiative, “Healthy Seas: A Journey from Waste to Wear”, took place on a wreck lying off Alepochori in the Gulf of Corinth on the 25th and 26th of November.

MEDASSET coordinates the initiative’s activities in Greece and the dive was organised by expert divers, Ghost Fishing Greece. The previous dive on the wreck, which took place last July, saw 400 kg of waste or “ghost” nets being retrieved and sent away to be recycled, while the most recent one produced even better results.

Due to its elongated shape, its steeply sloping geography, and the way that it connects to the sea beyond via a narrow and shallow opening at both its eastern and western ends, the Gulf of Corinth effectively exhibits the characteristics of an isolated basin and a large quantity of disused nets have been observed there.  Posidonia meadows grow over the sea floor, and there are also reefs and coral formations.  The Gulf also supports four species of dolphins.  Some of these appear to form mixed pods – a behaviour not usually seen in the open sea – while scientists have observed a hybrid dolphin that appears to be unique to the Gulf.  Since the state has committed itself to the inclusion of the Gulf in the NATURA 2000 network of protected areas, the formation of a “Management Organisation for the Gulf of Corinth”, which will cover six NATURA 2000 areas, has been announced.

The wreck to which the divers descended is that of a water carrier of Italian origin, initially known as the  NERA. The ship was passed to what was then the Greek Royal Navy and renamed STYMPHALEA. It continued to operate as a water carrier until 1978, when it sank.   The 40m long vessel, one of the few remaining wrecks in Greek waters that was constructed more than 100 years ago, now rests in the sand in an upright position off Alepochori at a depth between 28 and 34m.

During the two days of the dive, six specialised divers twice descended to the wreck.  The disused nets raised in this second phase exceeded 200 kg in weight, which means that a total of 600 kg have now been cleared.  Most of the nets were snagged on the bow and stern of the ship where they were not only acting as a death trap for the area’s marine organisms but also adding to environmental degradation of Gulf of Corinth’s ecosystem, which is already under a variety of pressures.   The effort to support it is urgent and must continue.

We should point out that the reclaimed nets will soon embark on a new journey.  They will be recycled and become part of the circular economy as they undergo processing that will result in the production of raw material – ECONYL® – that will be used in the manufacture of new consumer goods. The dive was coordinated by MEDASSET in association with dive organisers, Ghostfishing.gr and AquaTec Diver Training.  Significant support was provided by the Nautical Club of Alepochori. 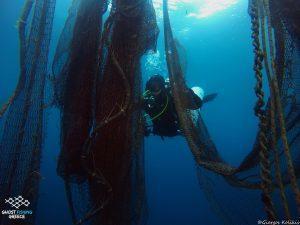 The mission of ‘Healthy Seas, a Journey from Waste to Wear’ initiative is to remove waste, in particular fishing nets, from the sea, so creating healthier marine environments and bringing reclaimed marine litter into the circular economy. The recovered fishing nets will be recycled, transformed and regenerated into ECONYL® yarn, a high-quality raw material used to create new products, such as socks, swimwear or carpets.