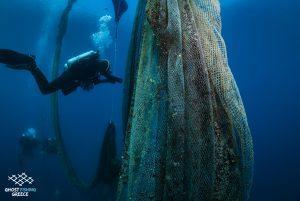 Over the weekend of 22-23 July, MEDASSET, in its capacity as coordinator for Greece, managed the first phase of the year’s second dive off the town of Alepochori, at the eastern end of the Gulf of Corinth. The dive was carried out within the framework of “Healthy Seas: A journey from waste to wear”, which is a European initiative aiming to retrieve abandoned “ghost” fishing nets from the seabed.
A 40m long wreck lies off Alepochori at a depth of between 28-34m. During the two days of the dive, the five specialised divers went down three times. During the first phase of the operation more than 400kg of nets were brought to the surface, and it is estimated that another two visits will be needed if all the nets, which are covering mainly the stern and bow of the wreck are to be removed. The recovered nets were creating not only a death trap for all kinds of marine creatures in the area (including seals, turtles, dolphins etc) but were also contributing to the general degradation of the Gulf’s ecosystem, making the argument for taking remedial action compelling.
The enclosed Gulf of Corinth, with its meadows of Posidonia seagrass, its reefs and coral formations, is home to four accepted species of dolphin, while a hybrid that has not been recorded elsewhere appears also to be present. In addition, there seem to be “mixed” pods – a phenomenon not observed in the open ocean. Scientists are calling for the Gulf to be included in the NATURA network, and this possibility is being examined by the Ministry of the Environment.
We note that the recovered nets are about to embark on a second phase of their existence – they will go on to play their part in the Circular Economy, since, once they are recycled, they will become the raw materials from which new products will be made.
The dive was realised by MEDASSET in partnership with Ghostfishing.gr and AquaTec Diver Training with important logistical support being provided by the Nautical Club of Alepochori. 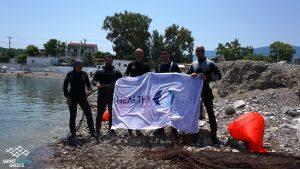 PRESS RELEASE – DIVING MISSION IN THE WATERS OFF SALAMIS ISLAND