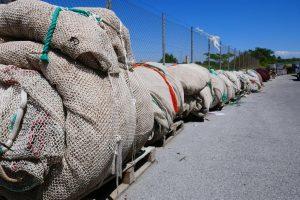 Yesterday, over 13 tons of waste fishing nets were transported from Greece for recycling, thanks to DIOPAS, a new partner of Healthy Seas in Greece. This major step marks the start of a cooperation that will bring disused fishing nets from Greek fishermen and fish farmers into the recycling process and so ensure that as few of them as possible end up in the sea as ‘ghost nets’.
In the early 1960s, the nets used in Greece were of cotton yarn, resulting in great inconvenience to the fishermen who were obliged to hand-dry their nets each time they were used, to prevent rotting. With the invention of nylon, the Japanese began making nets out of the new material and fishermen no longer needed to wash and dry their nets after bringing in each catch. This innovation drove the Greek market for imported nylon nets, which initially came in from Japan.

Ioakim Diamantidis – father of the current owners of DIOPAS – began to deal in imported fishing nets, selling them on to fishermen in Michaniona and the surrounding area in Northern Greece. After the death of Ioakim Diamantidis in 1982, his children carried on the business and created a new company called DIOPAS S.A. The company gradually grew and in time itself began to manufacture fishing nets. At the end of the 1980s fish farming became established in Greece, and in 1993 DIOPAS S.A. began manufacturing net cages for the expanding industry. It also developed nets impregnated with anti-fouling and other materials. Today the company produces a wide range of nets including: fish farming nets, fishing nets, fish farming net cages, shading nets, protective nets, predator nets, sport nets etc.

The waste nets collected by DIOPAS will be cleaned, sorted and prepared for recycling by Nofir. Nofir AS was established in 2008 in Norway, in response to increasing problems surrounding the utilization of net and rope reported by Norwegian environmental organizations, fishermen and public institutions. The aim of the company is not only the recovery of recyclable materials but also the reduction of water pollution caused by discarded equipement from the fishing and farming industries.

“We are very pleased with the cooperation with DIOPAS and the Greek fishing & fish farming community”, said Veronika Mikos, project coordinator of Healthy Seas. “According to a recent report, by 2050 there will be more plastic in the seas and oceans than fish. We have to work hard against it, not to let it happen. Today again, we made an important step in that direction.” she said.
Healthy Seas started its activities in Greece at the beginning of 2015 with the help of a local partner, MEDASSET (Mediterranean Association to Save the Sea Turtles). Since then, 73 tons of fishing nets have been collected by divers and fishermen to create healthier seas and recycle marine litter into new textile products. The nets will be transformed and regenerated into ECONYL® yarn, a high-quality raw material used in the manufacture of new products, such as socks, swimwear, underwear and carpets.

Healthy Seas
The mission of ‘Healthy Seas, a Journey from Waste to Wear’ initiative is to remove waste, in particular fishing nets, from the sea, so creating healthier marine environments and bringing reclaimed marine litter into the circular economy. The recovered fishing nets will be recycled, transformed and regenerated into ECONYL® yarn, a high-quality raw material used to create new products, such as socks, swimwear or carpets.

PRESS RELEASE – DIVING MISSION IN THE WATERS OFF SALAMIS ISLAND

Dive in the Corinthian Gulf (B' Phase)