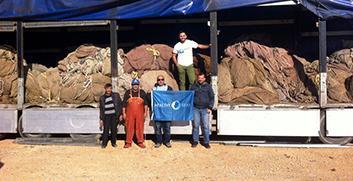 “Healthy Seas”: A year’s journey from waste to wear

The collection of 22 tonnes of waste and ghost nets marked the first year of MEDASSETs partnership with the Healthy Seas initiative which aims to clear the seas of “ghost” nets.

Since March 2015, Healthy Seas has been a very important tool with which to stimulate awareness among fishermen and the wider public regarding the impact of derelict fish nets, known as “ghost” nets, on the marine environment. There is a growing body of evidence showing that marine litter, in particular “ghost nets”, creates serious environmental, conservation, animal welfare, human health and economic costs that have an impact on many stakeholders. It is a global problem that requires urgent action. If implemented on a large scale, the waste diversion and reverse supply chain model will encourage a global closed-loop manufacturing economy, completely changing the way companies source manufacturing materials, and providing choices that empower consumers finally to move away from the tired old linear, one-time use, model.

In order to achieve our goals, we cooperated with fishermen’s associations in Attica to arrange for the collection and removal of waste nets (in Alimos, Mikrolimano and Perama) and did the same in Corfu through a partnership with the Hellenic Centre for Marine Research. We also cooperated with the Buck Institute for Divers Education (BIDE), which organised 4 dives (in Attica, Tolo, Telendos and Kalymnos) during which ghost nets were hauled up from the seabed. In addition, we collected discarded nets from fish farms in Astakos-Aitoloakarnania in cooperation with the Nireus Aquaculture Company. All the nets were recycled into premium quality ECONYL® yarn, which can now be used in the creation of new, quality products such as socks, swimming suits etc. Those nets would otherwise have been incinerated, creating toxic waste or, even worse, they would have continued silently and invisibly ghost-fishing for many years to come, bringing death to marine creatures large and small.

We are very proud to be part of the Initiative and motivated to make 2016 even better!
Stay tuned for more actions at medasset.org.