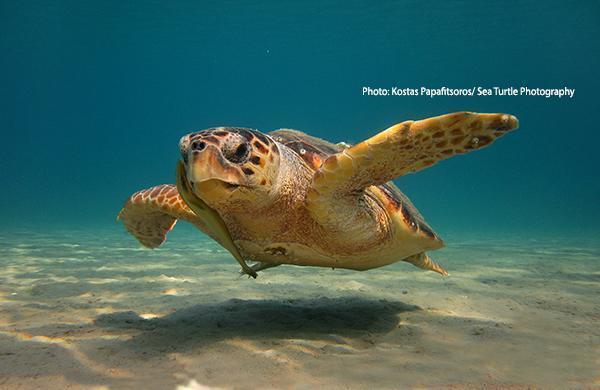 A SEA OF BOUNTY AND DANGER

The Mediterranean Sea is a bountiful yet dangerous place for sea turtles. In an area bounded by Europe on its northern shores, Asia to the east, and Africa to the south, sea turtles share their relatively small home (2.5 million square kilometers, or about 1 million square miles) with more than 150 million people who live along the coasts of 20 countries and two island nations. On top of that, the Mediterranean basin is by far the largest global tourism destination, attracting almost a third of the world’s international tourists every year. Characterized by beautiful natural and cultural heritage sites and by rich biodiversity, the Mediterranean is also a troubled and overexploited sea, where sea turtles have a hard time coping with high fishing pressure, gas and oil development, major cross-continental maritime traffic, beachfront and other habitat impacts, and widespread marine pollution.

A turtle’s journey around the Mediterranean, following the main counter clockwise surface currents, would begin at the inflow from the Atlantic that passes through the 14-kilometer-wide (less than 9 miles) Strait of Gibraltar, then along the coast of North Africa starting in Morocco, passing between Tunisia and Malta, and moving into the eastern basin. By now our hypothetical turtle would have gotten used to the high salinity (over 38 practical salinity units) caused by an imbalance between water gain through river inflow and loss through high evaporation. He would continue past the endless beaches of Libya and go by Egypt, where the Suez Canal allows Lessepsian fauna and flora migrants to enter from the Red Sea. Now he’d turn north, traveling through the Levant from Israel to Syria, passing zones of human conflict where turtle conservationists must watch out for more than just turtle nests on the beaches. Continuing westward, he’d pass between Cyprus and Turkey to continue along the southern coasts of Crete (Greece). Crossing over the sea’s deepest recorded point of 5,267 meters (3.3 miles) in the Ionian Sea, he would then take a trip to Croatia in the far north of the cold Adriatic Sea and would circumnavigate the Italian peninsula to complete his tour in Spain, having traveled some 11,700 kilometers (7,270 miles).

Continue Reading about Sea Turtles in the Mediterranean: