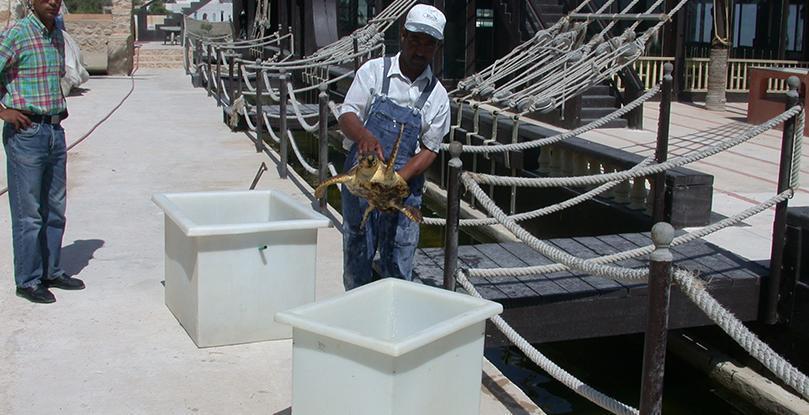 On June 23, 2003, an urgent message was received by our office: “Please tell me if anything can be done to help these turtles. … They won’t be able to live much longer; we really think speed is essential.”

A British family holidaying in Tunisia was appalled to see two sea turtles on display in a very small tank containing what was described as dirty, shallow water at a well-known seafood restaurant in Jerba. They were being kept for decorative purposes, beside a replica of a boat, in order to enhance the seafood restaurant’s décor and help attract customers.

This heart-wrenching sight prompted the family, upon their return to the U.K., to contact the Royal Society for the Prevention of Cruelty to Animals, who gave them MEDASSET’s email address. On receipt of the message, MEDASSET immediately alerted numerous environmental agencies and authorities in Tunisia.

A response came from APAL and RAC/SPA (UNEP/MAP), who informed us that arrangements were being made for the turtles to be confiscated and transferred to a rehabilitation center in Monastir run by INSTM and APAL.

On June 26, INSTM, aided by APAL, sent an investigation team to the restaurant in Jerba where they found the two sea turtles – both loggerheads – still alive. The distressed animals were carefully transported to the Turtle Rescue Centre in Monastir for rehabilitation.

The larger of the two, weighing 19 kilograms, was found to be in better health and was released into the Mediterranean on July 1 – just nine days after the initial urgent message was received! The smaller, just 4.6 kilograms, needed longer rehabilitation and was released a little later when sufficiently recovered.

This story is a fine example of cooperation, not only emphasising the importance of awareness and action by the general public, but also the effective collaboration of non-governmental, governmental and intergovernmental organisations. The rapid response by the Tunisian authorities, as well as the efficient rescue and release of these ancient mariners, confirms commitment to ensuring the conservation of natural heritage. Well done to all concerned!